I believe we need heroes 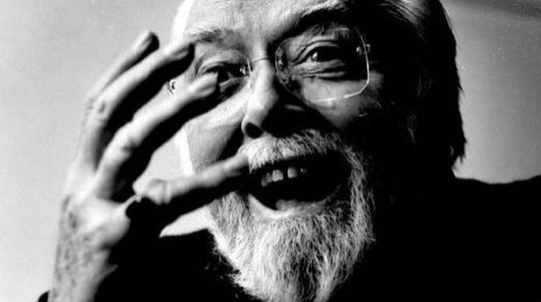 "Everyone must leave something behind when he dies . . . Something your hand touched some way so your soul has somewhere to go when you die . . . It doesn't matter what you do, so long as you change something from the way it was before you touched it into something that's like you after you take your hands away."

After a few weeks of tragic news, of untimely and violent deaths of the young, the unknowing, the innocent and the courageous, it's worth standing back to remember one of our greats who reached a grand age and lived a grand life.

Lord Richard Attenborough's name and face was synonymous with British film, an overused phrase – but literally a legend in his own lifetime. Not just for his body of work as an actor and a director, but for the dedication, fearless hard work and energy he put into the betterment of the British Film Industry, for the sake of his own passion and his own films and the sake of other filmmakers and actors who would stand the chance to live out their vocations, making the struggles they faced that little bit easier and giving their talent its chance to live.

"Nobody has done as much as he has for one industry,"
Melvyn Bragg.

"Nobody achieves this level of influence, and almost universal love and respect, without being a very special individual themselves, somebody who is very, very driven. Always a man with a cause."
Amanda Neville

"He had huge authority and great intellectual rigour - people listened to him."
Michael Grade

In life it's all too easy to stand back. To wait for others to make our opportunities arise, to blame others when things don't go our way.

Lord Richard Attenborough's life attitude is one that can inspire us all. The battles he fought were for the sake of the talent that is out there and the art and inspiration that comes from that talent.

"He got lottery money into the film industry... and that transformed the industry."

When a man from humble beginnings can go on to create such an impact. When one individual can achieve astonishing results for a whole industry we must be reminded that we all have a duty to do our own bit.

It's comfortable and easy in filmmaking and acting to let jealousy and resentment creep in, for egos and pride to yearn for one-upmanship, to slip into divides. Nothing can be achieved this way. Great things grow from solid living earth, not from dust and mud.

We can all work for changes that better ourselves and the next generation coming up behind us. We can all take a stand for positive action.

In difficult times despondency is easy. But it's worth remembering that Lord Attenborough would not have worked so hard or so tirelessly were it not for the same enormity of challenges he and others alongside him faced in their time. An echo of the difficulties we now face.

The following quotes about a man and a life truly lived can inspire us to never give up on our own dreams and remind us that if one man can create such a mark then many of us standing together as one can move even bigger mountains. Our strength is in our numbers and the actions of the many cannot be ignore. Please forward this newsletter on to at least one person in the industry you know and ask them to join the BFA (there is always the option of the free membership) we're already at several thousand – with those numbers growing and us standing and speaking together as one we'll yawp with a voice that cannot be ignored.

"British film would do well to live up to the example of industry, skill and compassion set by Richard, Lord Attenborough."

"The industry was on its knees... in the late 80s and early 90s. It was Richard's ability to persuade John Major to include film in lottery distribution that altered everything."

"He had a genius for knowing what to do and for having the persistence to go ahead and do it," Melvin Bragg.

"I adore my family, they are my joy. However, I am committed to my work. If on a Saturday morning when I was ostensibly going to be with the children and something arose at Rada or at Unicef or at the orphanage or whatever, I would allow the other pressures to take precedent."
Richard Attenborough

"We are deeply saddened to learn of the passing of esteemed filmmaker and former BAFTA President, Lord Attenborough Kt, CBE, whose passionate support of BAFTA for more than 50 years was integral to who we are today. He will be sorely missed."
BAFTA

"ET depended absolutely on the concept of cinema and I think that Steven Spielberg, who I'm very fond of, is a genius. I think ET is a quite extraordinary piece of cinema."
Richard Attenborough

"A titan of British cinema, to say he embodied its finest qualities is to have it backwards. British film would do well to live up to the example of industry, skill and compassion set by Richard, Lord Attenborough."

Here's to the Crazy Ones
Joe Sims: Actor Interview