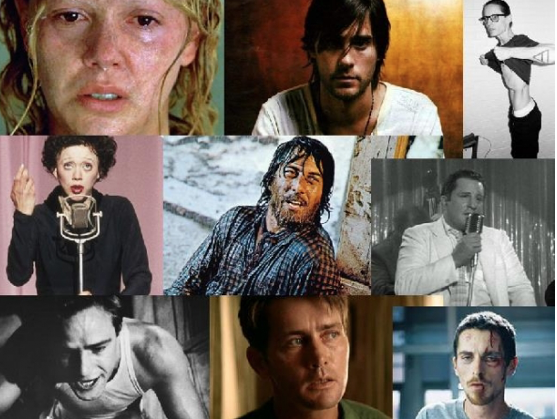 Actors often go to extreme lengths to prepare for roles, going into emotional or physical isolation, shutting down parts of their own personalities to inherit their characters so completely. Shedding or gaining pound after pound.

The shocking pictures of Jared Leto and Matthew McConaughey, the latest to do so, for the 'Dallas Buyers Club' are proof of the extremes true method actors go to for their craft. Sometimes these extremes are not so immediately apparent, especially when the effects are not of a visual nature.

At Wild Frontier Productions and the BFA's associated production companies our scripts aim to always be uncompromising, usually to some degree extreme, and sometimes shocking. There's nothing more awe inspiring for a writer or director than finding a common ground with an actor or actress who's willing to take up the challenge and go to the lengths these kinds of roles often require.

To all the actors and filmmakers who have taken on parts and positions in 'The Spoiler' and are joining me and Harry in going to incredible lengths for their roles, for their craft and for the support of the BFA we give you our thanks and assure you that the incredible journeys you take, behind closed doors, in the privacy of your own minds and on set will not go unnoticed.

But who we'd especially like to thank are those actors and actresses from among our members who tried out for roles which ultimately went to other people. Casting is never easy on either side of the table. We had a massive response and a great many self taped auditions to watch. I was overwhelmed by the kindness and encouragement you were all so good enough to show me after I wrote to those of you to let you know the roles had either gone to other actors or we'd not been able to fill at this stage. The ups and downs of casting are one of the many battles actors face that no one outside our circles ever knows about. And me and all your other filmmaking contemporaries face the same highs and lows, hopes; sometimes fulfilled, sometimes dashed, brick walls, closed doors, bureaucratic barriers and the omnipresent word 'no'.

The BFA will strive to provide a great many more opportunities than just this one production. And endeavour to make your productions open up an even more far reaching host of new opportunities too. All of us as filmmakers and actors standing together are a powerful force and have everything we need to make our own changes and create our own opportunities and carve out our own paths. It's what the BFA is all about.

Thanks again to the kindness, understanding and support shown by those actors we weren't able to offer roles to this time. And in recognition of the warrior like strength, tenacity and endurance and the sometimes astounding lengths actors go to to realise their aim here's a few of their stories to remind and inspires us….

GEORGE O'BRIEN - SUNRISE; A SONG OF TWO HUMANS
In order to achieve the menacing swagger with which he approached his potentially fated wife, George O'Brien played out his performance of 'the man' in the silent classic with twenty pounds of lead fitted in his boots.

MARLON BRANDO - ANY PERFORMANCE
"A movie that I was in, called "On the Waterfront": there was a scene in a taxicab, where I turn to my brother, who's come to turn me over to the gangsters, and I lament to him that he never looked after me, he never gave me a chance, that I could have been a contender, I coulda been somebody, instead of a bum ... "You should of looked out after me, Charley." It was very moving. And people often spoke about that, "Oh, my God, what a wonderful scene, Marlon, blah blah blah blah blah." It wasn't wonderful at all. The situation was wonderful. Everybody feels like he could have been a contender, he could have been somebody, everybody feels as though he's partly bum, some part of him. He is not fulfilled and he could have done better, he could have been better. Everybody feels a sense of loss about something. So that was what touched people. It wasn't the scene itself. There are other scenes where you'll find actors being expert, but since the audience can't clearly identify with them, they just pass unnoticed. Wonderful scenes never get mentioned, only those scenes that affect people." Marlon Brando

ROBERT DE NIRO - RAGING BULL
Robert De Niro put on 60 pounds in order to play the older Jake La Motta. As an actor will know - the weight he would have had to take on to convey the man's inner demons with such brutal yet subtle intensity would have been far greater.

DANIEL DAY LEWIS – ANY PERFORMANCE
To call Daniel Day-Lewis a "method actor" is to understate the case. Day-Lewis, who has just won his third Best Actor Oscar for Lincoln, uses very mystical language to describe his craft. He has talked of "the gravitational pull of another life that fires one's curiosity" and the "mystery" of performance, at least as practised by him in front of the cameras. He believes so fervently that he is the character he is playing that audiences are swept along with him.

LEONARDO DICAPRIO – ANY PERFORMANCE
DiCaprio didn't let a few shards of glass in his hand slow him down.
During the filming of "Django Unchained," producer Stacy Sher told Variety the actor accidentally slammed his hadn on a table so hard he broke a glass, injuring his hand in the process. Instead of stopping, DiCaprio carried on and the performance made it into the final edit.
"Blood was dripping down his hand," said Sher. "He never broke character. He kept going. He was in such a zone. It was very intense. He required stitches."

ANNE HATHAWAY – LES MISERABLES
The actress told Vogue she ate nothing but dried oatmeal paste for two weeks to lose 25 pounds for her role in "Les Misérables."
"I had to be obsessive about it — the idea was to look near death," said Hathaway. "Looking back on the whole experience — and I don't judge it in any way — it was definitely a little nuts. It was definitely a break with reality, but I think that's who [my character] Fantine is anyway."
The actress also cut off all her hair — something hair and makeup artists tried talking her out of — to comprehend the pain of a mother willing to do anything to keep her child alive. Her dedication paid off, as Hathaway earned her second Oscar nomination for the role.

HEATH LEDGER – THE JOKER
Ledger nearly descended into madness for his Oscar-winning role as The Joker in "The Dark Knight."
The actor locked himself in his apartment for a month prior to filming and estimated sleeping two hours per night for a week during filming because he couldn't stop thinking about the role.
Crew members also worried about the actor claiming he refused to speak to others out of character.
"If you tried to communicate with him normally instead of The Joker, he would just ignore you," a source told "He would often come to the set to hang out even on his days off, freaking everyone out. Towards the end of filming, he was warned by people that he had gone too far."

ED HARRIS - POLLOCK
In addition to gaining 30 pounds, Ed Harris watched a documentary and built a painting sudio for "Pollock" so he could master the artist's famous painting technique.
"The only thing I had ever painted before was my house," said Harris "He happened to move in the most efficient manner the human body can move."

JOAQUIN PHOENIX – WALK THE LINE
During "Walk the Line," Phoenix took months to learn how to sing and play the guitar. He took it one step further when he asked the entire set to call him JR, Johnny Cash's real name.
"I'm embarrassed about it now," said Phoenix "But when I heard "Joaquin" it just didn't feel right."

JARED LETO – CHAPTER 27
While we've seen him become extremely thin to play a character Leto has also gone in the other direction. For 'Chapter 27' he put on 60 pounds to portray mark David Chapman, the man who shot John Lennon. He reportedly achieved this by drinking a nightly shake of microwaved ice-cream, olive oil and soy sauce.

CHARLIZE THERON - MONSTER
Charlize Theron's transformation into serial killer Aileen Wuomos was astounding – so much so she picked up 2003's best actress Oscar.

CHRISTIAN BALE – The MACHINIST
Christian Bale's disturbingly gaunt frame in 'The Machinist' is a legendary tale of going all out for a character. The actor famously dropped 63 pounds for the part sticking to a diet of an apple a day.

Critics heaped praise on Marion Cotillard's award winning portrayal of French Icon Edith Piaf in 2007's 'La Vie en Rose'. The physical part of her transformation in Piaf took patience, with fives hour in a makeup chair every day. However as any actor will know, the real transformation would have been far longer and been far more arduous and happened in the places no one else knows of….

Don't wait!  The time will never be 'just right'
Here's to the Crazy Ones