Here's to the Crazy Ones 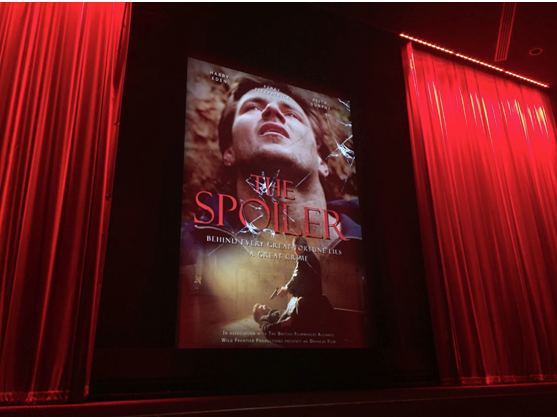 A huge thank you to all the BFA members, as well as family, friends and colleagues from the industry who stepped out to support us at The Spoiler's launch at BAFTA recently. It was a magical night and one I'll never forget.

Lots of people inspire me in life and, love him or hate him, you certainly can't ignore him - whatever your feelings about Steve Jobs, one thing is certain, the man in his own significant way certainly did change the world. There was one thing available to him, without which he would never have been able to do so. Not technology, not electronics, not money, not a business team, not a mulit billion dollar corporation - simply his own innate unshakable belief that he could.

Every battle must first be won in the mind.

We hear a lot of talk about business v art in the film world and it's a battle that must be approached from both sides. And just as Steve Jobs kept a foot in both camps, we as filmmakers must endeavor to do so too. Each of us; the actor, the writer, the DOP, the editor, the composer, is the founder, owner, sole creator and champion of a particular brand of business known as ourselves and it is no other individual's responsibility but our own as to how we promote and push that business and see it come to light.

We the dreamers, the crazy ones, are the only ones mad enough to try to change the status quo, and the particular world we at the BFA are fighting to change is one in need of a gentle revolution that can impact on us now and the next generation of filmmakers, actors and writers ahead of us.

I believe next year will see big changes for us all, so as the holiday season and the new year approaches dust off your dreams and remember why they became yours in the first place, they're still worth fighting for, but first you must believe in yourself, in the business of YOU and remember that the crazy ones stand apart and it's only they who can change things…

I leave you with a reminder of Steve Jobs top ten rules for success (you'll be amazed how many are applicable to the filmmaker and actor) plus a link to the full video of him discussing these and the ever inspiring 1997 advert that's as cool as any short film 'Think Different'. I urge you to watch both, as they will shake up your sense of self and remind you that rules are made to be broken and any closed door, negative opinion, brick wall, refusal or resentment can be answered with excellence.

We all have the capacity, the power, the potential to make life what we dream it can be. We just need to harness the belief that we too were born to make a difference, then make up our minds to do so….

1. Don't live a limited life
2. Have passion
3. Design for yourself
4. Don't sell crap
5. Build a great team
6. Don't do it for the money
7. Be proud of your products
8. Build around customers
9. Marketing is about Values
10.Stay Hungry, Stay Foolish

Going to Extremes...
I believe we need heroes