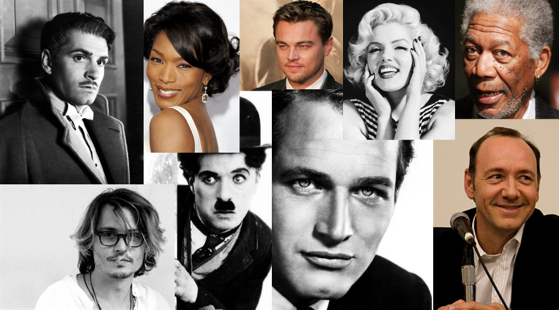 Even the most wizened of misers will be generous with one thing – their advice. People love to give it.

Any actor, or aspiring actor, will remember all too well the barrage of advice wrapped up as warnings they've been subjected to by all and sundry as soon as they revealed their most longed for ambition – mostly by those who've have never read a script, been to an audition or known the indescribable yearning that comes with wanting your place on stage or screen: 'It's impossible. You'll never make it.'

But a few do know the hard and twisting road that takes you through the impossible maze of trying to succeed in this art from and will always tell you it's worth fighting your way through the thorns.

It doesn't matter where the words of wisdom come from, we carry them with us like a talisman. A tiny pebble of certainty in the shifting sands of life. We still fall over, lose our way and get grit in our shoes. But somehow being sure of a truth, no matter what it may be, gives us hope.

So enjoy a small selection of advice and words of wisdom from those who trod the same path we tread now and got up one more time than they fell and made it through:

Kevin Spacey on Jack Lemmon
Kevin Spacey has revealed Jack Lemmon taught him to be a lead actor you have to be a leader:
What Jack always believed, and he passed down to me, was that when you're playing the leading role, it's not just a leading role, it's a leadership role. You can have a lot of influence on the environment, by doing your best, and always being there and always being ready and always being prepared, because that's what a company needs to see.
And part of doing all those things I just described is having a great time, being a bit of a prankster and making people laugh. To never forget that what we do is play, what we do is pretend, and what a remarkable thing we get to do with it.

Angela Bassett
I really believe that what I do as an actress is my God-given talent. This is my calling, not my career.

Brian Blessed
The greatest danger in life is to not take the adventure.

Christopher Reeve
What makes Superman a hero is not that he has power, but that he has the wisdom and the maturity to use the power wisely. From an acting point of view, that's how I approached the part.

Edward Norton
I've always thought of acting as more of an exercise in empathy, which is not to be confused with sympathy. You're trying to get inside a certain emotional reality or motivational reality and try to figure out what that's about so you can represent it.

Meryl Streep
Acting is not about being someone different. It's finding the similarity in what is apparently different, then finding myself in there.

Marilyn Monroe
There is a need for aloneness, which I don't think most people realise for an actor. It's almost having certain kinds of secrets for yourself that you'll let the whole world in on only for a moment, when you're acting. But everybody is always tugging at you. They'd all like sort of a chunk of you.

Johnny Depp
With any part you play, there is a certain amount of yourself in it. There has to be, otherwise it's just not acting. It's lying.

Ariana Grande
All I have to say is basically if performing, singing, acting ,and dancing is what you want to do, then you just have to do it - no matter where it is.

James Wolcott
Bad acting comes in many bags, various odors. It can be performed by cardboard refugees from an Ed Wood movie, reciting their dialogue off an eye chart, or by hopped-up pros looking to punch a hole through the fourth wall from pure ballistic force of personality, like Joe Pesci in a bad mood. I can respect bad acting that owns its own style.

Robert De Niro
One of the things about acting is it allows you to live other people's lives without having to pay the price.

Diane Kruger
With modelling, you pose. You want to look your best all the time. With acting, you have to be aware of the camera, but the more you show your imperfections, the better you're going to be.

Denis Leary
I think it's a shame when you come across young actors and musicians who haven't had the time to learn their craft. It doesn't matter if it's acting or music; you really have to learn how to do it from the bottom up because unless you have a great work ethic... fame is a terrible thing to have.

Anthony Hopkins
I tried acting, liked it, and stuck with it. I saw it as the way I would keep that promise to myself of getting back at those who had made my school life a misery.

Steve Harvey
You can take lessons to become almost anything: flying lessons, piano lessons, skydiving lessons, acting lessons, race car driving lessons, singing lessons. But there's no class for comedy. You have to be born with it. God has to give you this gift.

Jennifer Lawrence
Even as far back as when I started acting at 14, I know I've never considered failure.

Edith Evans
I know that if I'd had to go and take an exam for acting, I wouldn't have got anywhere. You don't take exams for acting, you take your courage.

Freddie Highmore
As always, with acting, you can't be too self-conscious. You shouldn't care about what people are thinking about you at the time because they're not caring about you, they're caring about the character.

Ingrid Bergman
I can do everything with ease on the stage, whereas in real life I feel too big and clumsy. So I didn't choose acting. It chose me.

Bella Thorne
I have to work extra hard because I am dyslexic. People said that I couldn't be an actress, but I'm proving them wrong. Acting has helped me overcome the challenge.

Morgan Freeman
I like the character roles. Somewhere back there I really came to the conclusion in my mind that the difference between acting and stardom was major. And that if you become a star, people are going to go to see you. If you remain an actor, they're going to go and see the story you're in.

Jean-Paul Sartre
Acting is a question of absorbing other people's personalities and adding some of your own experience.

Charlie Chaplin
The basic essential of a great actor is that he loves himself in acting.

Frank Capra
I made mistakes in drama. I thought drama was when actors cried. But drama is when the audience cries.

Michael Caine
I'll always be there because I'm a skilled professional actor. Whether or not I've any talent is beside the point.

Laurence Olivier
I don't know what is better than the work that is given to the actor - to teach the human heart the knowledge of itself.

Laurence Oliver
If I wasn't an actor, I think I'd have gone mad. You have to have extra voltage, some extra temperament to reach certain heights. Art is a little bit larger than life- it's an exhalation of life and I think I you probably need a little touch of madness.

Lawrence Olivier
The actor should be able to create the universe in the palm of his hand.

Lawrence Barrett
An actor is a sculptor who carves in snow

If we are lucky, the best advice will have been given to us as children. So I leave you with a phrase my father often gave to me when I was growing up. A phrase which become a mantra to me and has seen me over countless stones and kept me going no matter how tough and pointless and it sometimes seems…. "nothing's impossible"