Changing all the Rules 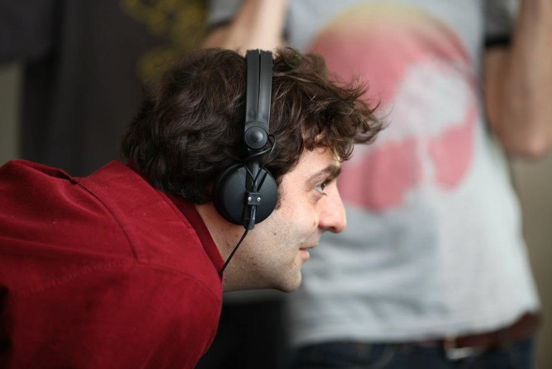 Firstly apologies for the lack of time since our last newsletter or magazine.
We're in one of our busiest periods at the BFA completing the post production of the first feature made in the BFA's name 'The Spoiler' https://vimeo.com/80752378

and at the same time we're in the final edit of our launch documentary 'Fires we're Starting...' I'm pleased to announce that BFA member Emily Underhill has taken over the role of editor for the documentary and we're both working very hard to complete the film right now. https://vimeo.com/72512763

Due to our current workload, as well as being guided by our members' preferences we will now be issuing 'Projection' the BFA's magazine, on a quarterly, rather than monthly basis.

So for the short term, please enjoy a small snippet of an article from the next issue, and from our forthcoming eBook on the Business Aspects of Film. This is part of an interview with the very talented writer/director and, more importantly consummate 'game changer' (as well as all round nice guy) Marcus Markou. Marcus broke the mold when it came to the sale and distribution of his feature 'Papadopoulos and Sons'.

Marcus' tireless hard work and its subsequent astounding results are proof positive that none of us can rely on 'the system' or any other abstract organisation or individual we dream might come along and believe in us enough to make it all happen. In this day and age, whether you're a writer, an actor, a make up artist or even a producer, like Marcus, success will only come if you get out there and make things happen. And if the rules don't work for you, again, like Marcus, you have to change them!
Marcus is an avid supporter of other independent filmmakers and, although he hasn't asked me to mention this, I'd like you all to know that all contributors to our eBooks are offered a royalty for their time and effort, however Marcus has insisted that his goes to the BFA fund to support members.

There is a very simple formula that applies to all life – rejection is protection and redirection to a better place. In an ideal world Papadopoulos & Sons would have been picked up as an indie and paid for in full by a distributor – covering all costs. But that indie model has collapsed. My mentor was a film producer called Elliott Kastner. He grew up in the studio system in the sixties and along with people like Dino De Laurentis pioneered indie movie making. They were mavericks that made films independently and then sold them back to the studios. Elliott made wonderful movies like Harper with Paul Newman and Where Eagles Dare and gave so many talents their first break like William Goldman. But by the late 90s that system was broken. Studios paid less for movies and by the time I made Papadopoulos & Sons they were paying nothing – unless of course, you had a big hit at Sundance or Toronto (examples such as Little Miss Sunshine and Slumdog Millionaire come to mind). Elliott passed away a year before I made Papadopoulos & Sons and I dedicated the film to him – his name is the first thing you see at the end in the title credits. He once told me he made a film called 'Oxford Blues' with Rob Lowe for $1m and sold it to MGM for $17m. I asked him how he did this. He said… "I told them I made it for 20!". There was another story attached to this in that MGM held the original rights to Oxford Blues as it was as remake of a 1930s movie called 'A Yank in Oxford'. I believe, and I could be wrong, that these rights actually lapsed while Elliott was making Oxford Blues!

The point is that this system cannot work anymore. Chris Jones told me – the author of The Guerilla Film Makers Handbook – that his first movie (made in the late 80s) ended up being nominated for awards. However, he pointed out, in that year only four indie British films were made. Today, there are 100s of UK indie films being made every year. Look at the applications to Sundance from around the world – in runs into the 10s of 1000s, all vying for a handful of slots. And out of those that make it to Sundance, only a small handful will end up getting picked up and rarely will they have the success of Little Miss Sunshine.

So yes, I was forced to do something different. What normally happens is that the filmmaker is so weary by the time his film is finished, so exhausted by the process of making his first or second movie, that when a sales agent says… "I can take this off your hands, give it is release… but I can't pay you anything because its going to cost me a lot of money just to do this" most filmmakers say… "Yes, take it… I just want to see it out there" The filmmaker figures that at least this has got him started on his career as a filmmaker. The sales agent gets a product that might do some business. But the sales agent has big costs attending festivals and markets and will have big overheads too. So the chances of passing on any profits from their sales will be minimal. Even if your film is a big hit, the sales agent will have to cover the costs of all the other films they picked up that didn't do so well and any profits from your film will be swallowed up.

In meetings with sales agents, I found that they were effectively playing this game. However, I had to remind them that I didn't care about my future career as a film director I was really there to represent £1m of family money that I had put into Papadopoulos & Sons. This was the money that my borther and I had saved over a five year period running our internet business (www.Dynamis.co.uk) The story there is that I gave up desire to be an actor in 2000 just after I graduated from LAMDA to help my brother Andrew build the business. We fought many battles together, built a profitable business and I gave the company 10 years of my life to secure its future. When I came to make the film, my brother never hesitated. For him, it was a big thank you for what I had done and I will be forever grateful to my little brother! However, once we made the film the family – who were understandably nervous about the financial commitment I had put them all through – saw the film and fell in love with it. They loved the film, its message, its spirit, its heart and the very story of the film says… "money doesn't matter" and my family did something quite beautiful and something that still makes me cry a little when I think about it. They took me aside in their own way… my brother, my father and even my mother… and they said, in their own way, 'you've made a film we are proud of… Marcus, forget about the money'.

However, ever since they let go, as I was forced to let go, the money has come in and we are around 40% recouped from sales raging from airlines to TV and Netflix and DVD. And in the next five years I expect to be fully recouped.

It's really simple. Make a film that matters to you. If you only have £5k, make it for £5k. Forget this idea about a career. If you want a career get a job in another industry. You cannot have it both ways. This is art. You cannot have a career in art. And you make it from your heart. And if you have £1m, then make it for a £1m. But being able to tell your story to the world, being able to reflect on what you believe the world to be and how it should be is the point of making a film. And if I only ever make one film and its only Papadopoulos & Sons then you should be very happy because it is a reflection of your values, beliefs, your heart and soul. I didn't second guess what the market wanted, I made something authentic and with heart and if the film has technical or story telling flaws it really doesn't matter at all. And there are directors out there with 10 movies under their belt that can't say this. And I have yet to meet a film maker who has the purchase order directly from the BBC framed in the downstairs loo as I do! This is the remarkable achievement. I got to invoice the BBC direct – not the sales agent, the producer, the investor… but the writer of this story. The story teller invoiced the BBC (who will screen Papa & Sons this Autumn). This is a first that I am proud of.

The how I did it is a story in itself and I would strongly recommend that anyone interested in the 'how' listens to a podcast I did with Chris Jones on self distribution. It's out there on the web if you type "Self Distribution" and my name.

Lots of people ask me if I would do it this way again and I would be lying if I said… "Yes! I want to do it this way again!" Because the truth is, I don't. However, I think I have enough integrity as a film maker and as a man to approach actors that are 'film financeable' and I hope I have enough to say about the world that would get them to read the script and say… "I want to do this… even without big money… because it's a story that needs to be told". So I am half way through a new script and I am hoping that with the perceived success of Papadopoulos and Sons I will be able to approach actors that trigger film financing and also distribution. This doesn't mean I will be trying to second guess what the market wants. Not at all. I will still be working very hard to find those stories of the heart that connect audiences emotionally. That's the goal. But, if I never achieve it and I find that I've only got £10k to make the next one and I can't get Benedict Cumberbatch, then as a story teller that is trying to be true to himself I will go out and make it with £10k and a cast of unknowns and that will be an adventure in itself. And who is to say it won't be an even bigger adventure than having a £3.5m budget and a star attached. Isn't that the point? And don't most artists and filmmakers forget this? I hope I never do.

Brexit: Where will leaving leave us?
Don't wait!  The time will never be 'just right'