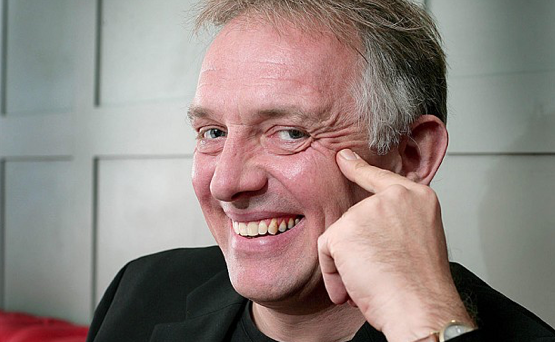 Into everyone's life comes someone. The one person who makes you see yourself differently, see the world differently. Makes you realize your dreams and understand more deeply all the things you knew you could do but were afraid to try. Whether you ever know them personally, or they're figures of inspiration, only known to you through their work, they're still figures who've encouraged you, by their own life examples, to face the doubt and ridicule of others and stand tall and fearless for your own vocation.

I never met Rik Mayall but he was a hero to me. Heroes come in many different guises. I'd written to him a few years ago and told him about my work and my plans and I asked him to become attached to a project of mine. In the end he became attached to four – two without ever having read the scripts. For me it was a wonderful moment, more than I could explain. Not just because an actor I loved and admired had acknowledged my work as being of worth and wanted to be involved. But because it was a moment that made me realize there is no sense in life in holding back or playing it small to protect yourself from disappointment or the judgment of others.

For all of us trying to pursue a career in the arts there is the constant battle with rejection, disappointment, frustration, embarrassment and heartbreak at being told no and fighting against the self doubt that creeps in because of it. I agonized before writing to Rik Mayall, it could so easily have gone the other way, either polite rejection or the prolonged torture of silence, would have left me crushed and the battle that little bit harder to keep fighting for.

It's the same for actors going for the dream role, for producers fighting for funding, for filmmakers yearning for their dream cast and for those of us with completed projects trying to find distribution and give our films an audience. We all have the shared experience and the common battle. That's why it's more important than ever for those members of the BFA who want to find an alternative way for things to happen to come together now as our work enters a new phase.

What finally gave me the push and made me throw my caution to the wind and write to Rik Mayall was that I realized that he was no different to me, or any of you who've had to fight for your dreams. He chose to stand out at a very safe conventional time to offer something different and completely off the wall. And his courage, probably against a barrage of ridicule and rejection before the break came, helped to change the way things were and offer an alternative option for people who were crying out for something fresh and exciting. Another aspect that finally gave me the courage to write to a hero was brought home with slamming sadness yesterday – and that was the old adage 'life is short'.

We only have one shot at this – no one gets out alive. Why would any of us wait around and put off fighting for the talent we were born with and dreams that nag at us to be called into aliveness.

Today I feel heartbroken for someone I didn't know personally. But I'm so glad that a few years ago I overcame my nerves, my fears and my self doubt and now have the knowledge that in his lifetime my hero knew that I existed, read my writing and filled me with a euphoria that cannot be described by giving me one simple word 'yes'.

We will all go through our battles, and we'll suffer the slings and arrows of the word 'no' a thousand times. But when the word 'yes' comes, from those who it matters to hear it from the most, all the pain and struggle fades away and means nothing.

Four of my films will now, to me, not have the sparkle they otherwise would have had if fate hadn't played the hand it did yesterday. But I'm privileged to have the cast I do have on board some of my other scripts, both known actors and undiscovered talent and for them, and myself, I'll never stop fighting for my dreams.

So if, like one of his funniest characters, Lord Flashheart, you have a plan and it's as hot as your pants - pursue it with the same vigour, exuberance and sheer force of nature he put into everything he did.

God bless Rik Mayall. I'm sure wherever he is, everyone's laughing.

Remembering our reasons…
The Play That Goes Wrong...